Divergence, derailment, and diversity of #BlackLivesMatter and #AllLivesMatter discussions

Hashtags on Twitter have become well established as a way for people to come together around seemingly any topic. Hashtags allow us to collectively tell jokes (#IceCreamAMovie), mark celebrations (#HappyNewYear), refer to sports (#SuperBowl51, #IPL),  and engage in (or enrage about) politics (insert your hashtag here).

For social and political movements especially, hashtags have enabled people to both (1) powerfully frame their mission, and (2) anchor a durable, collaborative thread of public discourse. One could even argue that a “rallying hashtag” has become an essential element for any growing social/political movement (#MeToo, #MAGA, #NeverAgain, #2A).

But hashtags also make movements visible to the world, especially opposition groups, the media, and researchers. From their adversaries, they are thereby open to attacks, mockery, and destabilization. As independent observers, we ideally have sunlight-based reporting and analyses, and that’s what we’ll talk about in this post.

In a paper that’s just appeared in PLOS One, our team at the Computational Story Lab used hashtags to explore the dynamics of the Black Lives Matter protest movement along with counter-protest Lives Matter movements.

Let’s start with a comparison of time series showing the number of tweets containing the hashtags #BlackLivesMatter (blue) and #AllLivesMatter (red) over 12 months starting in August 2014. The tweets come from Twitter’s Gardenhose, a 10% sample of all tweets. (We really aren’t trying to signify political colors here.)

Time series showing the frequency of #BlackLivesMatter and #AllLivesMatter tweets from August 2014 to August 2015 with major related events labeled. Frequencies reflect the 10% Gardenhose sample of Twitter.

About two years ago, I tweeted out a less aesthetically pleasing version of this figure. I received a number of comments in the vein of “Wow, you can really see how #AllLivesMatter is only in response to #BlackLivesMatter, and they can’t sustain a conversation.” At a quick glance, it does seem that #AllLivesMatter only rises when #BlackLivesMatter does and that it otherwise dies off. If we look closely though, we can see that not all of the spikes are exactly synchronized. Also, although the correlation is intriguing, it doesn’t tell us anything about the discussion between individuals using these hashtags.

So we set out to dig deeper and pull apart the conversations of these hashtags. If #AllLivesMatter did talk about “all lives” (the framing of which has been brought under question) or topics other than #BlackLivesMatter, then we would be able to see those unique topics reflected in the language of #AllLivesMatter.

We focused on the eight one-week time periods shaded in the figure above, looked at how the two hashtags diverged, and measured which words were responsible for the divergence. Below you’ll see words that drove the divergence between #BlackLivesMatter and #AllLivesMatter following the non-indictment of Darren Wilson for the shooting of Michael Brown in Ferguson, MO. Words to the left were more prominent in #AllLivesMatter, while words to the right were more prominent in #BlackLivesMatter. We’ll come back to what the colors mean.

Divergence word shift for the week following the non-indictment of Darren Wilson in the shooting of Michael Brown.

You might be skeptical that we simply didn’t read the right tweets, and that we overlooked deeper pro-#AllLivesMatter conversations among some other popular tweets. That’s where the colors come in. Darker colors indicate that a word was used diversely (with many other words in many tweets), whereas lighter colors indicate that a word was used with only a few other words. Since all of the words we are interested in are shaded lightly, we can be confident that our reading of the tweets wasn’t biased by a bad sample. So, the main words driving the divergence between #BlackLivesMatter and #AllLivesMatter during this period were due to hijacking by #BlackLivesMatter.

This is the case for many of the other time periods. However, hijacking doesn’t dominate #AllLivesMatter in two periods: after the shooting of two NYPD officers, and during the Baltimore protests following the death of Freddie Gray. During these periods, discussion of police lives, conservative views, and “riots” dominate #AllLivesMatter.

Divergence word shift for the week encapsulating the protests in Baltimore following the death of Freddie Gray.

By looking at what hashtags were used together in these discussions, we can move beyond the word level and look more broadly at the network backbone of topics within #BlackLivesMatter and #AllLivesMatter. 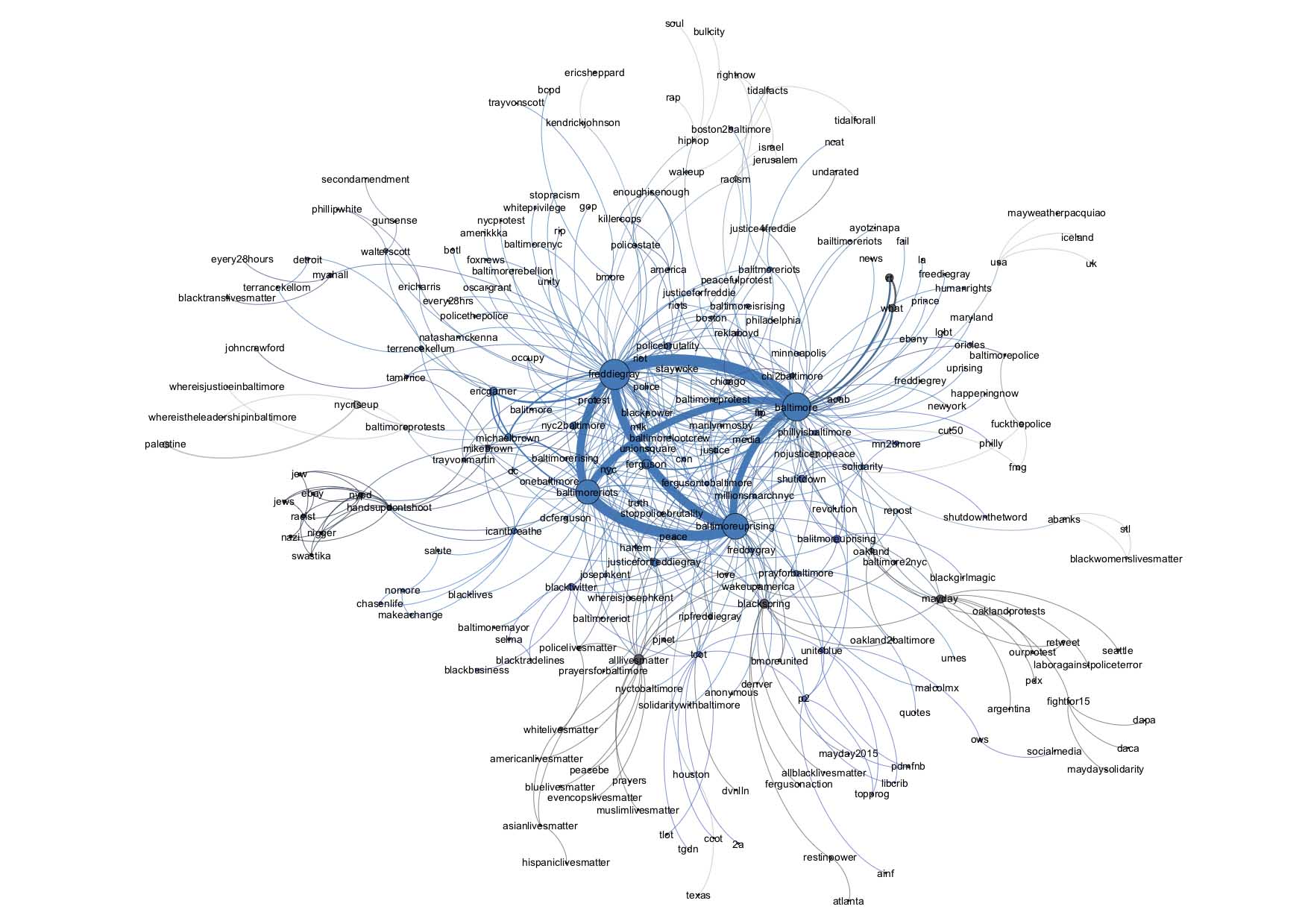 #BlackLivesMatter hashtag topic network for the week encapsulating the protests in Baltimore following the death of Freddie Gray. 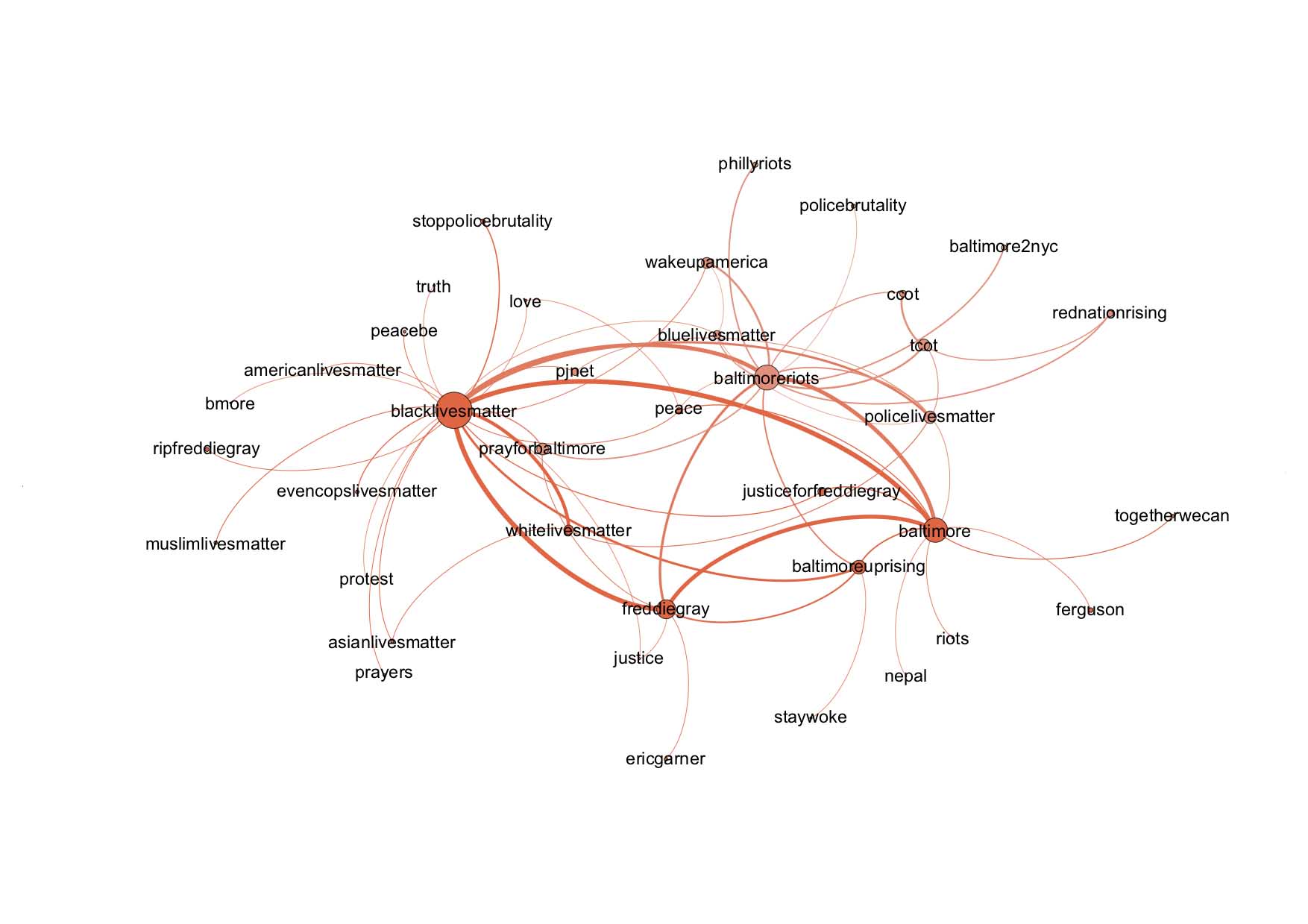 #AllLivesMatter hashtag topic network for the week encapsulating the protests in Baltimore following the death of Freddie Gray.

Distributions of informational topic diversity of #BlackLivesMatter and #All LivesMatter, computed from repeatedly subsampling the same number of tweets from both hashtags and measuring hashtag diversity.

Of course, this is not the end of the story for these two hashtags. At the end of our sampling window of 12 months, we begin to see a surge in both hashtags because of the early primary events for the 2016 election in the United States. And in the summer of 2016, the year following, the shootings of Alton Sterling and Philando Castile and the soon after Dallas police shooting set off another round of contention between #BlackLivesMatter and #AllLivesMatter. The message of Black Lives Matter has continued to endure through these events, shaping the broader discussions we have about police, racism, and justice.